The species problem from the modeler’s point of view 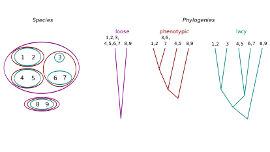 How to define and delineate species is a long-standing question sometimes called the species problem. In modern systematics, species should be groups of individuals sharing characteristics inherited from a common ancestor which distinguish them from other such groups. A good species definition should thus satisfy the following three desirable properties: (A) Heterotypy between species, (B) Homotypy within species and (E) Exclusivity, or monophyly, of each species. In practice, systematists seek to discover the very traits for which these properties are satisfied, without the a priori knowledge of the traits which have been responsible for differentiation and speciation nor of the true ancestral relationships between individuals. Here to the contrary, we focus on individual-based models of macro-evolution, where both the differentiation process and the population genealogies are explicitly modeled, and we ask: How and when is it possible, with this significant information, to delineate species in a way satisfying most or all of the three desirable properties (A), (B) and (E)? Surprisingly, despite the popularity of this modeling approach in the last two decades, there has been little progress or agreement on answers to this question. We prove that the three desirable properties are not in general satisfied simultaneously, but that any two of them can. We show mathematically the existence of two natural species partitions: the finest partition satisfying (A) and (E) and the coarsest partition satisfying (B) and (E). For each of them, we propose a simple algorithm to build the associated phylogeny. We stress that these two procedures can readily be used at a higher level, namely to cluster species into monophyletic genera. The ways we propose to phrase the species problem and to solve it should further refine models and our understanding of macro-evolution.